The semiconductor industry loses billions of dollars each year due to IP infringement. A major enabler of IP piracy attacks is reverse engineering. Reverse engineering enables an attacker to identify the device technology used in an integrated circuit (IC), an IC’s functionality, and/or its design. Reverse engineering an IC involves depackaging, delayering and imaging the individual layers, annotating the images, and extracting the netlist of the design.

IC camouflaging is a layout-level technique that hampers imaging-based reverse engineering; this technology was developed by Syphermedia. Camouflaging introduces cells that look alike from the top view but can implement one of many possible Boolean functions. On reverse engineering a camouflaged IC, an attacker cannot infer the correct functionality of the camouflaged cells by inspecting the layout through imaging techniques. IC camouflaging is performed by inserting dummy contacts, filler cells, programmable standard cells, or a combination thereof.

An example camouflaged circuit with two camo gates is illustrated. Each camo gate can implement either a NAND, NOR or XOR; due to the use of dummy contacts, the functionality cannot be inferred from the layout pictures. In the illustration the red gates denotes the actual functionality of the camo gates; the attacker has 9 combinations to try!

The camo gates are bigger, slower and more power-hungry compared to their standard counterparts. Therefore, only a small subset of the gates can be turned into camo gates for practical implementations. 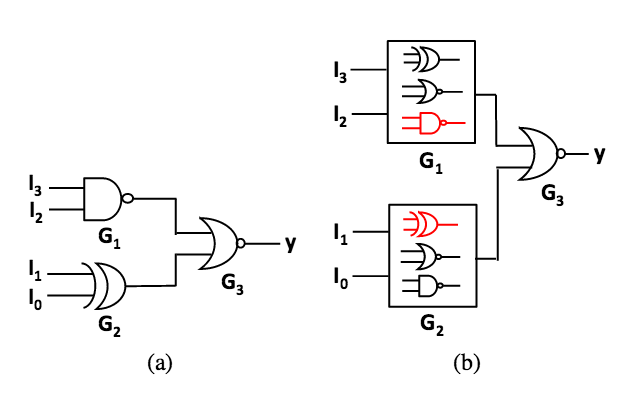 The original and the camouflaged circuits. Each camouflaged gate can implement one of three functionalities, unknown to the reverse engineer.

Which gates to camouflage?
When the gates to be camouflaged are selected randomly, an attacker can infer the correct functionality of the camouflaged gates by sensitizing the camouflaged gate outputs to the primary outputs of the circuit. Sensitization of an internal line l to an output O implies that any change on l will be observable on O.

In the example to the right, the camo gates implement either NAND or NOR. To reveal their functionality, the inputs to the camo gate need to be justified to a 10 or a 01, and its output should be sensitized to an output. In the example, a single input pattern do this for both camo gates. The computed pattern 10011 is called an attack pattern.

A working chip can then be used as oracle. The attack pattern(s) can be applied to the chip, and the chip’s response can be used to infer the camo gate functionalities. 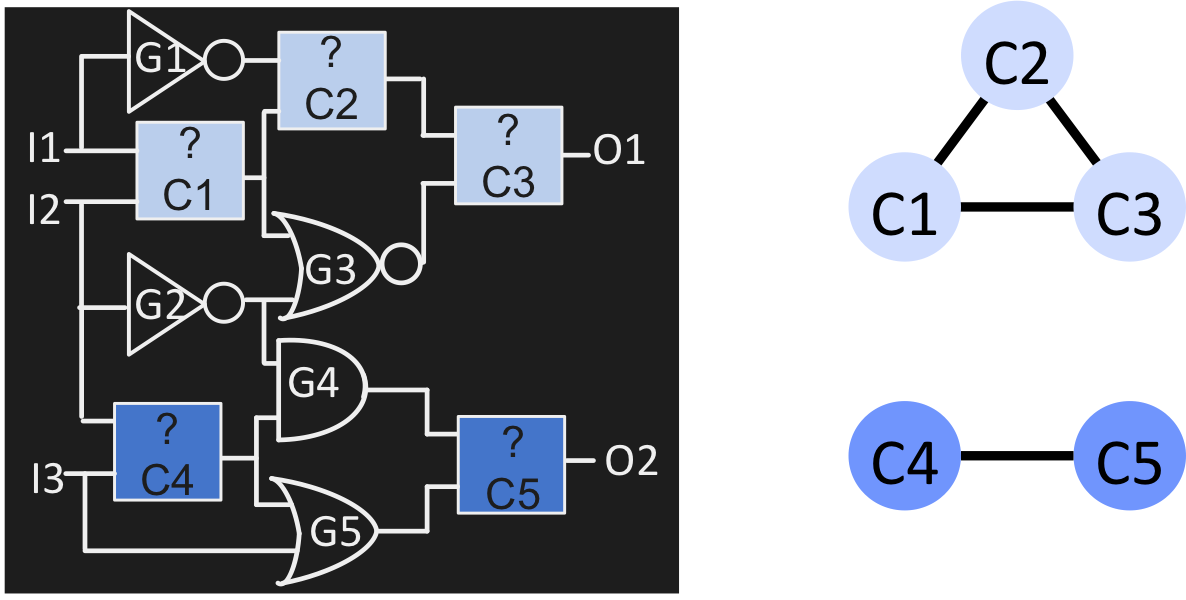 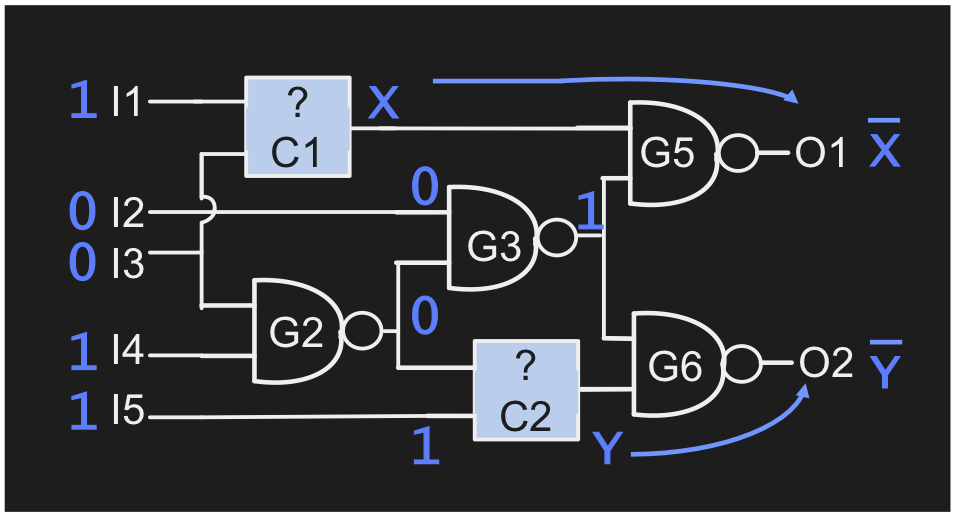 Sensitization attack example. For more information, refer to our paper c74 or c75. 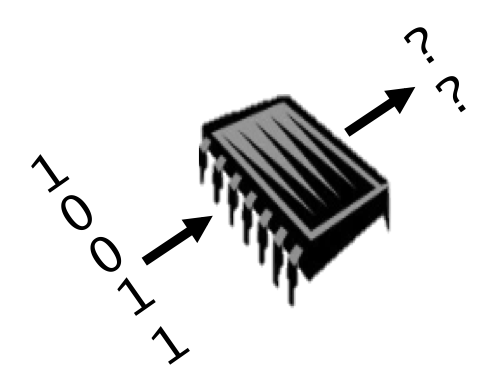 DeCamo Attack
CBS and all the other camouflaged gate selection techniques are vulnerable to a recent Boolean satisfiability (SAT) based decamouflaging attack, namely, DeCamo attack; decamouflaging refers to the identification of the functionality of a camouflaged gate. For more information, refer to the paper titled “Integrated Circuit (IC) Decamouflaging: Reverse Engineering Camouflaged ICs within Minutes” by El Massad, Garg and Tripunitara presented at NDSS 2015. DeCamo attack needs a functional chip to be used as an oracle and a camouflaged netlist, i.e., the netlist obtained through reverse engineering the layout, similar to the sensitization attack. The attack employs a SAT solver to compute discriminating input(s) (DIs). A DI is an input pattern that, when applied to a camouflaged netlist, produces an incorrect output for an incorrect assignment. The DIs can be used to eliminate the incorrect assignments. By computing and applying the DIs iteratively, an attacker can eliminate all incorrect assignments and extract the correct assignment.
Defense Against DeCamo Attack: CamoPerturb [c97]

Previous IC camouflaging techniques try to protect the entire design (i.e, all the minterms)}. However, they are susceptible to DeCamo attack. Hence, we try to approach this problem bottom-up. We try to protect a selected set of minterms in the design.

Protecting the minterms is a useful feature in the following scenarios:

The proposed approach, contrary to all the existing camouflaging schemes, applies a simple transformation to a given design, and modifies its functionality rather than camouflaging it; the response of the function to one of the minterms is toggled. We refer to this operation as minterm perturbation. A separate camouflaged block, CamoFix, restores this perturbance, recovering the functionality of the design. The minterm that is perturbed is the designer’s secret and dictates the design of CamoFix.

Obfuscating the Interconnects: Low-Cost and Resilient Full-Chip Layout Camouflaging [c104]
As discussed above, prior art typically has to carefully select which gates or which minterms to camouflage/protect, also to limit the impact on power, performance and area (PPA). One may argue that such “small-scale or custom camouflaging” will eventually be circumvented, irrespective of the underlying technique. Besides, prior art is based on FEOL-centric implementations, requiring accordingly customized manufacturing processes.

Here we propose a novel camouflaging scheme which is low-cost, resilient, and generic. Our scheme is based on obfuscating the interconnects (BEOL); it can be readily applied to any design without modifications in the device layer (FEOL). Illustrated below are the secret n:1 mapping in the BEOL, which obfuscate the inputs for any regular gate (not only two-input XOR). The set of possible functionalities depends on n:1, the selection of the input nets, and the gate type.

Applied with split manufacturing in conjunction, our approach is the first in the literature (as far as layout camouflaging is concerned) to cope with both the FEOL fab and the end-user being untrustworthy. 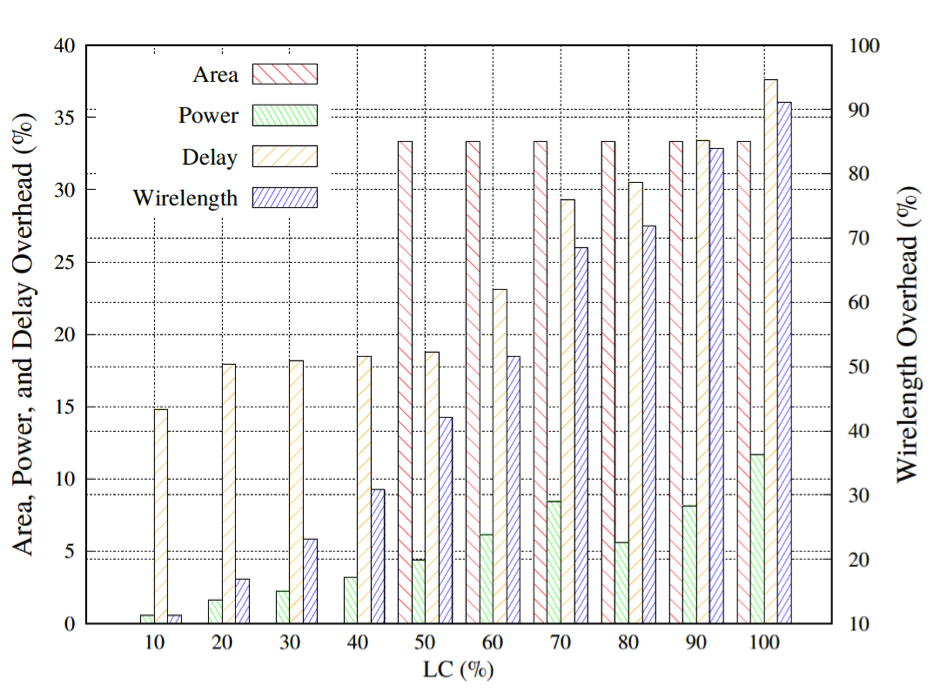 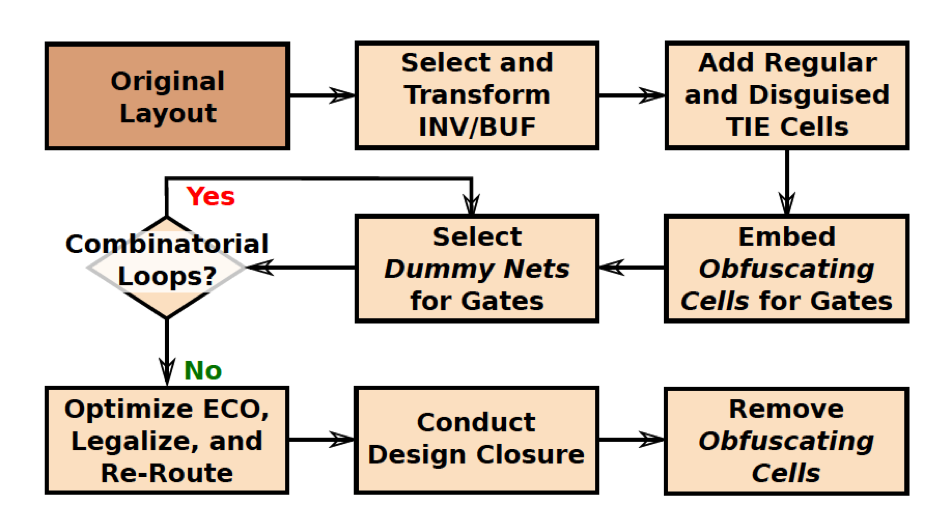 We provide an overview of our camouflaging methodology, which can be easily integrated into any design flow. In this work, we implement our methodology for Cadence Innovus 15.1. 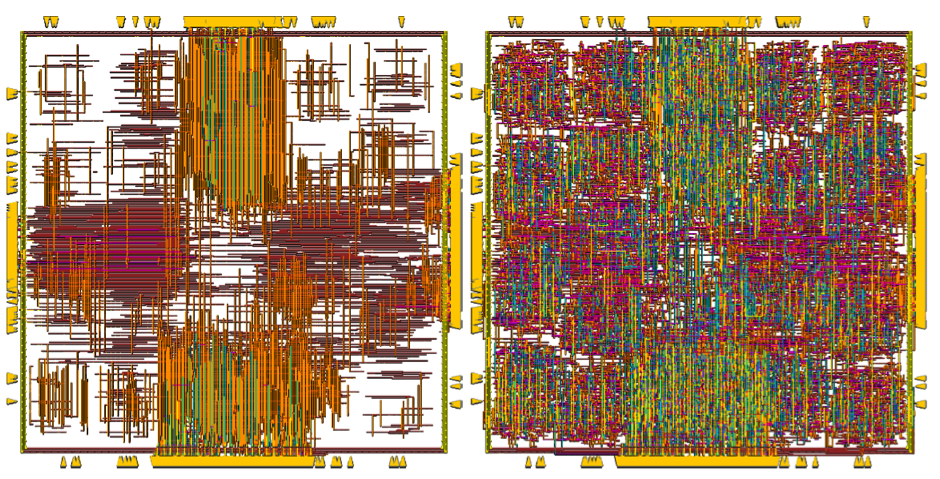 Use of metal layers (M5-10), left indicates original design, whereas right denotes a fully-camouflaged aes_core.
Copyright rules (licensing with Cadence Innovus) don’t allow us to make the flow accessible to the community. Interested people can drop us an e-mail with their design files (a Verilog netlist and associated SDC file). We are working closely with other concerned parties to make the flow available as soon as possible, without violating any copyright issues.